Little Rock, AR. – Governor Hutchinson has proclaimed August 6-12 as Farmers Market Week in the State of Arkansas joining the national proclamation by the United States Department of Agriculture.

“Our farmers markets support local economies; offer fresh, healthy food sources for our families; and provide a way for farmers to directly engage with consumers. We are proud to join a national week of highlighting the role agriculture and farmers markets play in strengthening our communities.”

An official proclamation, available at https://governor.arkansas.gov/images/uploads/170806_2017_Farmers_Market_Week_in_the_State_of_Arkansas.pdf, has been signed by Governor Hutchinson and states:

· Farmers Markets are important outlets for agricultural producers in Arkansas, providing them with increased opportunities to meet consumer demand for a variety of fresh, affordable, healthy, and locally sourced products;

· Access to healthy food is a priority area for the Healthy Active Arkansas Initiative to reduce obesity rates in the State of Arkansas;

· The increased consumption of fresh produce and other farm products found at Farmers Markets, as part of a well-balanced diet, promotes the health and well-being of Arkansans;

· The number and popularity of Farmers Markets in Arkansas continue to rise as more and more consumers discover the benefits of locally grown and locally made products;

· The State of Arkansas recognizes the many benefits of Farmers Markets for agricultural producers and consumers and is committed to educating our State and this Nation about the important role of Arkansas agriculture in providing for our food supply and food security;

The AAD is dedicated to the development and implementation of policies and programs for Arkansas agriculture and forestry to keep its farmers and ranchers competitive in national and international markets while ensuring safe food, fiber, and forest products for the citizens of the state and nation.

The Arkansas Agriculture Department offers its programs to all eligible persons regardless of race, color, national origin, sex, age or disability and is an Equal Opportunity Employer.

January saw the start of Arkansas’ 91 General Assembly and there were several bills that have an effect on agriculture across Arkansas. We were actively involved in the legislative process and we had good success in working for good legislation and defeating legislation which would have been harmful to agriculture.
State Tax exemptions
SB 115 (Hendren & Pitsch), now Act 78, lowered the state’s income tax and created a legislative task force to review the state tax code. SB 115 was one of two bills in Gov. Hutchinson’s tax cut package. The task force has been appointed. The task force includes 16 members of the legislature and will file its initial report before Dec. 1, 2017. Farm Credit plans to actively engage in the work of this task force because they will be reviewing all of the state’s tax exemptions which includes all agriculture tax exemptions. You are encouraged to let your State Senator and State Representative know how important these exemptions are to the agriculture industry.

Criminal Trespass is a Class D felony if the trespasser has two or more misdemeanor convictions of trespassing. It is Class A misdemeanor if at the time of the trespass you are in possession of: a killing device when not used in lawful taking of game, a harvesting device, a device primarily used to unearth artifacts, a tool designed to gain entry into a structure, the person is on the premises of a commercial fishing or fish breeding operation and at that time is in possession of a fishing pole or net or the person has a prior conviction of trespassing.

These are the legal defenses:
• Guests or invitees
• Required to enter for business or health/safety reason
• Authorized by law to enter
• Privately owned premises are made open to the public
• Person owns or is employed by a person or entity that owns property adjoining the premises and is traveling over the premises with good faith for a legitimate reason
• If the person who enters the premises of another person is:
(A) Temporarily on the premises of the other person for the sole purpose of recovering livestock, a dog, or any other domesticated animal; and is
(B) Either: (i) The owner of the livestock, dog, or other domesticated animal; or
(ii) An employee or agent of the owner of the livestock, dog, or other domesticated animal.
Permit Efficiency Bill
HB 1511, now Act 501, (Wardlaw) compels ADEQ to make a final permitting decision on animal waste permits within 180 days of application.
Addition Funding for the University Of Arkansas Division Of Agriculture
House Budget Chairman Rep. Lane Jean confirmed that the University Of Arkansas Division Of Agriculture was “taken care of” in the budget. The money will be approximately $3 million of one time funds coming from a settlement negotiated by the Attorney General’s office.
Tail Water Recovery Credits
Sen. Cheatham’s SB 729, now Act 1125, which extends the carryover period for unused income tax credits allowed for water impoundments, from 9 to 15 years following the year in which the credit originated. The extension should further incentivize tail water recovery construction.
Waste Tire Bill
HB 1267, now Act 317, by Rep. Lanny Fite will increase funding to the state’s waste tire districts while improving record keeping for used tires in the state. Each county will set up a drop off point for tires and farmers will be able to recycle up to four large implement tires daily. Funds will also be used for grants for clean-up efforts where there are large volumes of tires.
Crawford’s New Cuba Trade Bill Aims Offers Compromise
Arkansas First District Congressman Rick Crawford, a longstanding champion for agricultural trade with Cuba, recently announced plans to introduce a new compromise bill aimed at opening up agricultural trade with Cuba. The draft bill, which has not been formally introduced yet, seeks to remove existing barriers for credit financed trade deals between the U.S. and Cuba as have previous measures he’s supported in past years, but it also aims to appease some U.S. interests who were harmed during the Cuban revolution. The bill proposes to create a new fund financed through a new tax on new exports to Cuba which would serve as a reparation fund to help pay the claims of those who lost property when Fidel Castro came to power in 1959.

The Farm Credit associations in Arkansas donated $13,000 to the Northeast Arkansas chapter of the American Red Cross to support flood relief efforts across the state.

Widespread flooding in late April killed five people and displaced hundreds of Arkansans. True to its mission, the American Red Cross was one of the first agencies to mobilize and offer assistance to persons in affected areas. The Red Cross served more than 7,500 meals, distributed nearly 1,700 clean-up kits and provided 1,000 overnight shelter stays.

“The devastating impact of these floods was simply overwhelming”.

“Our employees live and work in the rural communities we serve which makes this disaster very personal for us,” McJunkins said.

The Farm Credit System additionally supports the rural communities of Arkansas through CoBank agribusiness cooperative loans which provide essential infrastructure services. Combined, Farm Credit organizations provide more than $4 billion in loans, leases and related services in Arkansas and returned $25.8 million to their customer-owners, and the Arkansas economy, this year. 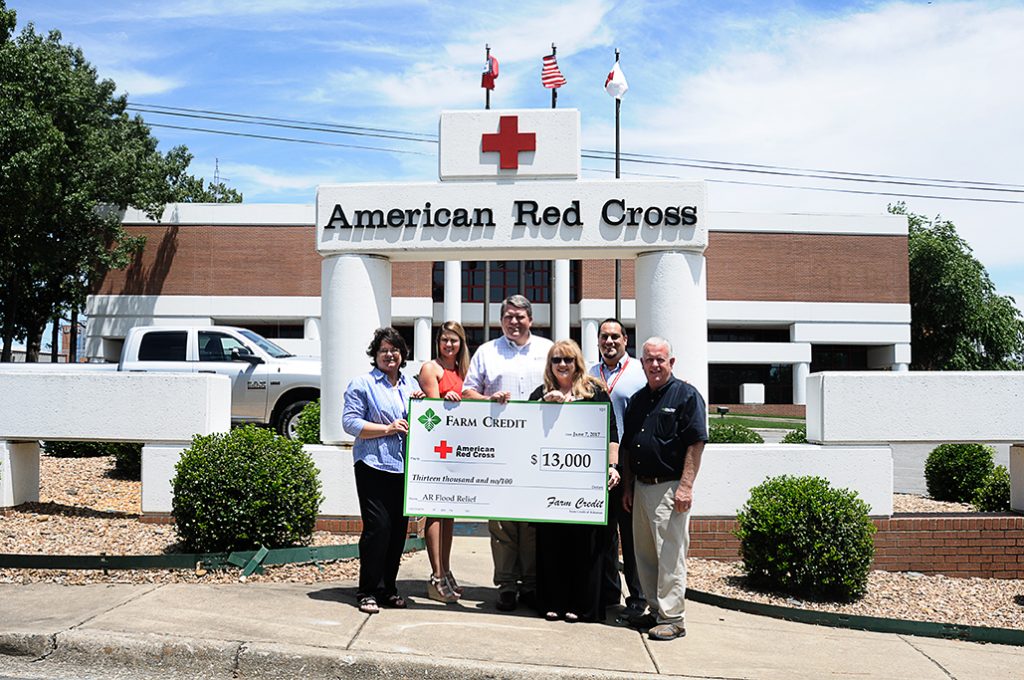 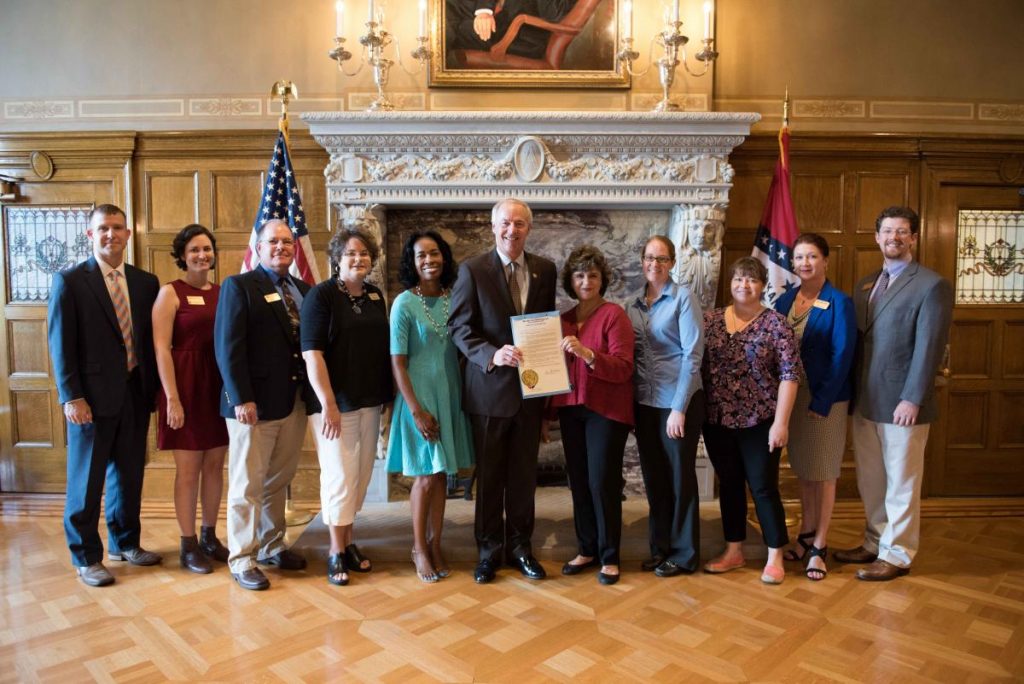 Governor Asa Hutchinson proclaimed August 7-13, 2016, as Arkansas Farmers Market Week.  The Arkansas Agriculture Department supports farmers markets in a number of ways to include the Arkansas Farmers Market Promotion Grants program, which is sponsored by Farm Credit. Farmers market and Farm Credit representatives joined Wes Ward and other members of the Arkansas Agriculture Department at the proclamation signing.